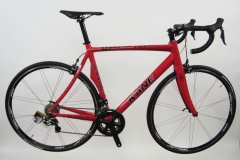 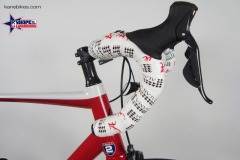 A wounded U.S. Marine has used cycling to rehab his body due to his injuries. We worked with Hope for the Warriors to deliver an Alabama themed bicycle. 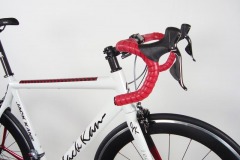 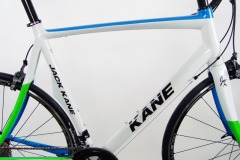 Paul had wanted a Kane for years. When it came to finally getting one, he gave us an idea of design he wanted and the colors and left the rest to us. He now has an uber clean looking Jack Kane. 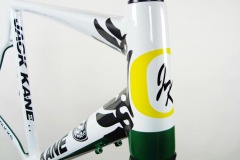 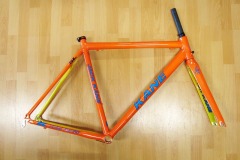 #793 features a rich orange and yellow paint job with blue graphics. The yellow has a green tint to it. The design is topped off with a fine pearl finish which shines in the sun. Carbon fork with carbon steerer tube. 54cm, $1,349.99 Complete builds available. 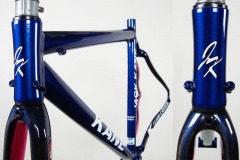 A stunning deep metallic blue provides a cool foundation for the pink and exposed carbon accents. The carbon has a blue flip-flip over it. 49cm 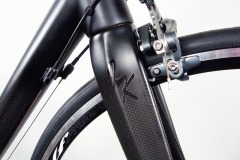 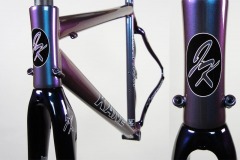 1E Super Light aluminum with carbon rear stays. Th main triangle has a lighter flip flop and the front fork and rear stays have a darker shade. It glistens in the sun. 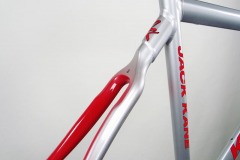 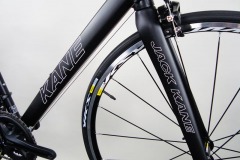 A K Team Carbon with a matte black and white pinstripe paint job. A classic look.

Women bikes should be allowed to have attitude too. This Kane does just that -- glossy black with a crystal style paint job. $2,799.99 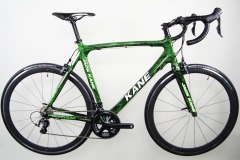 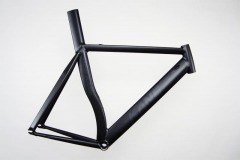 This rider kept breaking carbon frames, so he needed a sturdy and bomb proof frame. That's why he came to us. On top of that, this Kane was shipped to Guam. It set a new record for distance a Kane has been shipped. 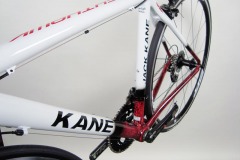 When you start from scratch, you're able to have all the part match and complement the frame. That's what we did with this one. Enjoy.

Steve was so impressed with his Cervelo paint job that he wanted a Jack Kane. As he put it, "For anyone wondering about buying a Jack Kane Bike, my question is, why haven’t you purchased one yet? It will be the best bike buying experience you will ever have."

Black On Black with Glossy Green

The 2014 Charlotte NODA Grand Prix winner wanted a black on black design with touch of color. It's the first Kane we've done a contrasting finish other than the logos. The color is a pearl green.

A U.S. Marine Corps. & Hope for the Warriors themed Kane. The Greek letters on the seat tube are for his fallen Brothers. They face the rear because they always have this Soldier's back. Beautiful bicycle.

This is a murdered our Jack Kane. It's also the first bike to ever have the signature as the down tube logo.

A calm blue with a darker blue pearl finish. There's exposed carbon inside the fork blades, seat stays, and chain stays. Finally, touched with white accents and the sought-after Jack Kane signature. Lighter than a lot of carbon frames at 15lbs 10oz. #769

3k weave carbon with a simple and clean paint fade. The Easton EC90 Aero fork even had a 3k weave.

Matte black and gold. Are you jealous yet?

Jimmie cracked his old carbon bike and instead of repairing it, designed his own NC State themed bike. The bell tower is an icon and the Wolfpack in exposed carbon fiber is sexy! We took his components from his old bike and he's ready to go!

A Virgina Tech alum wanted to show of his school colors with a prominent paint fade. The stone inside the stays represents a building on a campus and the exposed carbon is just sexy!

\"I want my bike to scream girly and be really flashy... one of a kind... \" Matte black and pink with carbon accents around the frame, custom pink decals for the wheels, and Dura Ace 9000.

You know your have a great TT frame when a rider drools for another -- that\'s what happened here. Instead of a bright color fade, this time the rider wanted exposed carbon fiber and select color accents and ghosted Hawaiian creatures.

Read BikeRoar\'s review of our Nighthawk SL. Crazer paint, pearl finish, exposed carbon, and pinstripes. Only on a Jack Kane will you find personalization like this all the way to the handlebar tape. It\'s a bike you won\'t forget.

Ever since John came into our showroom, he\'s yearned for a Kane. When the time was right he upgraded from his Cervelo P2. We partnered up and designed one fantastic and sleek carbon tri bike. Did I mention it only weights 18lb 09oz?!

One of the coolest look women\'s bikes ever paint. It features extremely tight masked lines, gorgeous pink to purple fades, radiates with a pearl finish, and has plenty of exposed carbon to go around. The icing on the cake? It has flowers on the top tube and inside the fork blades. Weighs in at 15lbs 1oz.

He wanted a red, white, and exposed carbon fiber design. He was inspired by another bike in our gallery and desired a bike similar to it. Can you figure out which bike is was?

When he came into our shop, he wanted to go all out. He wanted a bike his friends were going to be like, \"Dude, that is awesome\".

Aluminum time trial frame with flip-flop paint. The colors change from blue to green to purple depending on the angle you look at the bike. Ultegra 6700 gruppo.

Purple is the name of the game for this rider. She now rides a purple K Team Carbon SL and a purple Battle Axe SL!

Argyle: It can be tricky and can be tacky if not done artistically. Jack was up to the challenge and dominated it. We wanted to incorporated the carbon fiber into the weave to give it some accents. This K Team Carbon Krono shows off a very sleek argyle theme amongst other special personal details. The blue base has a pearl finish that, when in the sun, lightens to a beautiful robin egg blue and reflects very tiny flicks of titanium 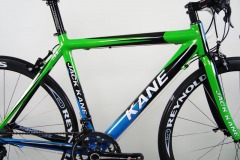 Our top of the line high mod carbon Nighthawk SL bicycle with Campagnolo Record, Reynolds Carbon tubular wheels, Profile Design Cobra carbon handlebar. It weighs in at 13lbs 14oz. It is one of the lightest road bikes out there. Call us, 910.455.1011

2011 Endurance Films Racing Team Triathlon Bike. This amazing bike has a DVD disc wheel and the front wheel creates an optical illusion of an old film reel while spinning.

A 1970 Citadel alumni pays tribute to his college. Commonly referred to as \"The Citadel Bike\", we looked at the colors, uniforms, and overall feel of the College and Jack created this design. We can design a bike to express your college/university pride! http://www.citadel.edu/

A 19x Ironman pays tribute to Kona, Hawai\'i, and Ironman World Championships with this full carbon triathlon frame. Triathletes love standing out from the sea of same-ness, so should your bike. This design has lots of tribal art, floral patterns, and aquatic life.

This bike wants to stand out and it does. You cannot hide when riding this abstract, alien-like, and colorful triathlon bike. Everything except the decals is paint. He happens to be a huge 311 fan too.

Simple and sleek, yet it stands out more than you realize on the road.

This triathlete wanted to pay tribute to his school.

This rider is so full of life and fun that her design suits her personality so well! This is \"Pearl\"

Talk about a perfect surprise for your wife!! That's what a Kane customer did for his.16lbs 5oz SRAM Force carbon Jack Kane Battle Axe.

One of our customers coined the name for this bike. This bike features hot greens in the paint, tires, and handlebars. It stands apart from others on the track / velodrome.

This K Team Krono has a special paint that when in the sun, tiny silver and blue flecks sparkle in the blue areas.

Jack Kane Bikes is a jack-of-all trades bicycle company. Jack has been in the industry since 1973. We have our own line of aluminum and carbon frames that are painted in-house. We also specialize in painting other bicycle brands. Finally, we're a carbon fiber repair shop.